For more than 30 years The Jensens have been hosting a holiday open house. In the eighties, when Bob was an art teacher in Nyssa, he “supported his teaching habit” by selling his hand-thrown pottery and water colors out of his home-studio. During the summers he would show and sell his wares at art-shows in Oregon and Idaho. It was at these shows that he built a clientele of follow-up customers who would order pieces by mail and phone throughout the year. One wall of the Jensen’s family room was 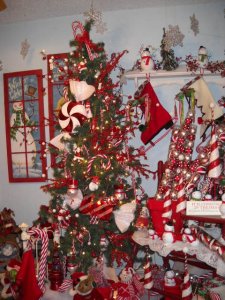 dedicated to shelves that featured Bob’s pottery. People would stop by the house and shop when they needed a gift or piece for themselves. The business was mostly seasonal, but Judy decided to couple her love for the holidays, her passion for entertaining and her head for business and create a holiday open house. The idea was to open the home for a couple of weekends in November for a holiday party that featured Bob’s work. Judy would decorate the house of the holidays and serve refreshments. Bob’s customers from Eastern Oregon and Western Idaho would come to the Jensen’s Open House year after year.
When Bob took a teaching job in La Grande in the early 90s, the tradition of the annual open house continued. As the business grew from the family room shelves, to the seasonal gallery in Joseph, to the studio on the corner of 6th and Penn, the Jensen’s holiday Open House expanded into a two-month holiday extravaganza.

The Jensen’s move to 6th and Penn allowed for the expansion from home-studio to gallery and gift shop AND Judy finally got her Victorian home. In addition to building the business, Bob and Judy were also busy reviving the 1890’s house to its original charm. People who shopped at the store were ever-curious to see the inside of the house. Also, the garage converted to studio/store is small. With Bob’s art and Judy’s gifts the store is packed even before the Christmas inventory arrives. So Judy hatched the plan to continue her open-house tradition and invite people into her restored Victorian for a holiday open house. There was only one problem. The furniture was taking up valuable display space. So, room-by-room the couches and beds were packed off to a storage shed to make way for the Christmas shop. Over the years the event has grown (first 30 themed trees, then 40, then 50…) and more rooms have had to be dedicated to store and fewer to living.

Every October the move-out/Christmas store conversion begins. The furniture gets hauled out and the boxes of trees, decorations and Christmas delights are moved in and staged. It takes a month to complete the transformation. Judy is promising more than 70 themed trees and lots of Christmas surprises. You won’t want to miss the Jensen’s annual Christmas Open House aka The Enchantment of the Season. The 2013 open house is November 7 – 9 and then house and store are open for holiday shopping through Christmas Eve. Come see the beautiful Victorian home, eat some holiday treats, catch up with friends, get started on your Christmas list (what to give and what you want), get decorating ideas AND get inspired by the merriment! This is after all, The Enchantment of the Season!

One thought on “Holiday Open House”